The Australian Open has begun a new chapter with the historic dual-gender tournament getting underway in Victoria.

In what Golf Australia boss James Sutherland describes as a « world first », the men’s and women’s Australian Open is being played concurrently.

A field of ﻿156 men and 108 women will compete for $3.4 million in prizemoney, with men and women teeing off in alternate groups.

« It’s something that had been thought about previously, but there were plenty of obstacles to stop us doing it, » Sutherland told Wide World of Sports.

« As far as I can gather it’s the first time in the world a national open has been played with this sort of format. »

It’s a decision that hasn’t been met with universal approval, with Scott Hend pulling out of the tournament, saying he believes the Australian Open is such a prestigious tournament the men’s and women’s events should be held separately.

The Australian Open is live on Nine and 9Now from Thursday.

« Scott obviously has a right to an opinion, but it’s not as if we’ve just gone into this blindly.

The move to make the Australian Open a dual-gender event comes a decade after the Vic Open made a similar decision, one that has reinvigorated the tournament.﻿

« The Vic Open has probably been Australia’s best tournament for the last 5-10 years, and that’s the same format, » 2006 US Open champion Geoff Ogilvy told Wide World of Sports.

COVID-19 played havoc with the Australian Open, with the men’s event cancelled in 2020 and 2021, and the women’s event ﻿not held in 2021. Sutherland wryly observed that all he’d done since joining Golf Australia was « cancel Australian Opens. »

Cameron Smith will have the chance to make history at the tournament, as he seeks to become the first Australian to win the Open Championship and Australian Open in the same year.﻿

This year’s event is being played at two courses, with the players to play one round at each of Victoria Golf Club and Kingston Heath over the first two days, with Victoria to host the weekend.

It’s the first time since 2006 the men’s Australian Open has been held outside of Sydney.﻿

« It’s great just to have the Australian Open back on, to be honest. It’s fantastic to have it on the sandbelt, » Ogilvy said.

« It’s been in Sydney for a really long time, which is fine, but Melbourne has been starved of the Australian Open for a long time.

« Everyone’s pretty excited, and to have both men and women playing concurrent tournaments at the same venue, I can’t imagine it being anything but great. »

The 2019 Women’s PGA champion, Hannah Green, told Wide World of Sports the women won’t shy away from being compared to the men, even though they’ll be competing for different trophies, and playing off different tees.﻿

« It’s nice to be back in Melbourne, to have the men and women playing two really good courses on the sandbelt, it’s fantastic.

« ﻿I hope towards Sunday the scoring is pretty close between the men’s and women’s championships. » 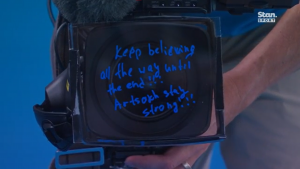