Ibaka was a good player for a long time, leading the NBA in blocks per game twice early in his career with Oklahoma City and then transforming into a solid outside shooter. He was a key rotation player for the Raptors when they won the title in 2019.

Unfortunately, Ibaka underwent back surgery in June 2021 while with the Clippers and hasn’t looked the same since. At 33 years old and in his 14th season, he certainly has a wealth of experience, but it’s unclear how much he can contribute on the court at this point in his career.

The Bucks reportedly agreed to seek a trade for the veteran big man, who has only made 16 appearances in ’22-23. The Nets, Heat and Hawks are among the teams said to have interest in Ibaka.

An energetic big man, Plumlee is having a career year for a 13-35 Hornets team that currently has the third-worst record in the NBA. Considering he turns 33 in a couple months, is an impending free agent and the Hornets are going nowhere this season, it’s fair to wonder why Plumlee is playing a career-high 28.3 minutes per game, but he has provided solid production.

All of those things are positives, but Plumlee is a subpar defensive player who isn’t a threat to shoot, though the right-handed center has busted out a one-handed lefty jump shot on occasion. He’s actually shooting above his career mark from the free throw line. He’s ideally more of a decent backup than a starter, but maybe the Hornets can get a second-round pick or two for him if they take on some money beyond this season.

The Wolves have reportedly discussed an extension with Reid, with a maximum offer worth about $58M over four years. Don’t expect him to get that much as a free agent, but considering an extension hasn’t been reached, obviously there’s a gap between what the Wolves have offered and what Reid is seeking.

The Clippers, Nuggets and Nets have all reportedly expressed interest in the 23-year-old, who has shown some interesting flashes when given minutes. However, his addition to this list is more cursory than anything, because it’s hard to envision the Wolves trading him unless they’re absolutely certain he will walk in free agency.

Karl-Anthony Towns is still injured, so Reid has a big pretty spot in the rotation. The Wolves would want to get a player who can contribute right away in return if they moved him.

That’s complicated by the fact that the former undrafted free agent is earning less than $2M this season – you can’t find many rotation-ready players at that price. If Reid does get traded, it seems more likely that he would be part of a multiplayer trade that sends out – and brings back – more salary than his alone. 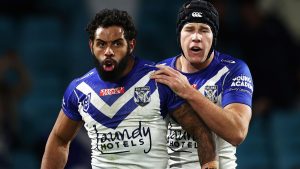