Australian football greats Mark Bosnich and Craig Foster were only too happy to scoff down some early morning humble pie after the Socceroos shocked Denmark to qualify for the World Cup round of 16.

Both pundits had at times been critical of coach Graham Arnold as the Socceroos spluttered their way through an underwhelming qualifying campaign that culminated with Andrew Redmayne’s goalkeeping heroics against Peru.

﻿Former Socceroos captain Foster also questioned why Nathaniel Atkinson was not substituted ﻿earlier in the 4-1 World Cup loss to France as the Australian fullback predictably struggled to handle the toughest individual assignment in world football.

But ‘Boz’ and ‘Foz’ were generous with their praise after watching Arnold pilot Australia into an improbable date with Lionel Messi’s Argentina on Sunday (AEDT).

« During the qualifying period, he came under a lot of criticism, including from myself, » Bosnich said on SBS.﻿

« At the time it wasn’t looking good for him. Two points out of a possible nine.

« He stuck through it. Credit must go to Football Australia and (chief executive) James Johnson, it would have been easy to let him go at that time. »

Foster said Arnold was « at the centre » of Australia’s compelling World Cup campaign.﻿

« He did an amazing job today, amazing job in the past couple of games, » he said on SBS.

« He made all the right decisions against Tunisia and he’s done it again today. They had the plan for when they went 1-0 up today. »

Foster then ﻿elaborated on his admiration for the coach in an interview on Nine’s Today.

« Great work by Graham Arnold as well because a player had to come off and all of a sudden he had to adjust and he put Riley McGree on the left and he bought on a young Keanu Baccus who had a brilliant, brilliant game, » Foster said.

« And it was Riley McGree in a different position who made that beautiful forward pass with his left foot and then Mathew Leckie’s through.﻿ »

Arnold had given a sharp ﻿response to his critics after the previous win over Tunisia.

« I haven’t seen who was critical, » Arnold said.

« Some of them have never even been to a World Cup. I don’t listen to them. They have no effect on my life. » 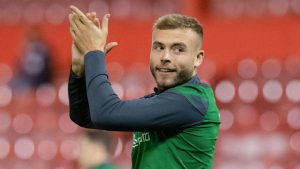