England captain Harry Kane and head coach Gareth Southgate have once again backed the ‘OneLove’ anti-discrimination campaign but accepted it will have a limited impact in Qatar.

On Wednesday it was announced England would join forces with nine other European nations in a campaign against discrimination. Originally initiated by the Netherlands, the OneLove campaign aims to promote inclusion, with captains wearing a distinctive armband.

Kane will pull on that armband for the first time in England’s Nations League tie with Italy at the San Siro on Friday night and the intention is for it to be worn in Qatar during the World Cup as well.

Asked about the impact the campaign could realistically have in Qatar, given the country’s human rights record, Kane said on Thursday: « There is only so much the players can actually do and wearing the armband on the biggest stage in the world will have an impact.

« But we can only do what we can. We have definitely taken a step forward to help some of the issues in Qatar. »

Kane revealed he had spoken to former team-mate and Denmark captain Christian Eriksen and his current Tottenham colleague Hugo Lloris, who captains France, about the campaign.

It has been launched just a couple of months before the World Cup kicks off in Qatar, where a spotlight has been shone on the treatment of migrant workers and where Kick It Out says there is a « risk » for LGBTQ+ fans and players who may wish to travel to the Gulf state for the tournament due to homosexuality being criminalised in the country.

Asked about the campaign, England boss Gareth Southgate added: « There is not a lot more the players in particular can do other than talk about those issues and put them on the table because in the end, we are asking for change in a country we are respectful of, has made progress, but don’t have any control over. »

Southgate continued: « We’ve done a lot of research, the FA have had countless meetings with NGOs, migrant workers in Qatar, they’ve gathered all the information and requests of people affected. There’s a limit to what can be achieved.

« Talking about the issues and raising the issues and putting them on the table is the vehicle that people involved in sport we’ve used in the past and it is what we’re trying to do this time.

« There will always be criticism, whatever you do but we’re trying to affect the areas we’ve been asked to affect. Unless other ideas come forward and other requests that we think are suitable are on the table, then it’s difficult to do more than we’ve been asked. »

Southgate: We must be ruthless to succeed at World Cup

Turning attention to the football, Southgate says England must be « completely ruthless » if they are to achieve their goals at the upcoming World Cup after admitting he « compromised certain decisions » during the disastrous four-game spell in June which has left the Three Lions on the brink of relegation from League A in the Nations League.

« I felt I compromised certain decisions internally, and you don’t win if you compromise, » he said.

« It was good for me to sharpen that focus again because what we’re going into we’ve got to be completely ruthless and I’ve got to create an environment for the players that allows them to excel and to provide them with the best platform to be at the level they’ve been for the last five or six years. »

Southgate refused to clarify what those compromises were but insisted he was confident he and his coaching staff could resolve the issues which led to humbling defeats home and away to Hungary and draws with Germany and Italy.

« There were so many circumstances in the summer with, firstly, high-quality games, high-quality opponents, but also the need to look after some of our big players.

« I think every nation did that. Talking to the managers of Denmark, Belgium and France over the summer, they all found that challenging because they’re all thinking about the World Cup as well.

« Also players that we wanted to see more of because there’s no friendlies after this, which you’d normally have for a tournament.

« Two games behind closed doors… so any number of reasons but also we reflected and dissected everything as a group of staff.

« When you’ve been through [challenging] spells as a manager, which I have, that helps you because you’ve got real clarity on what needs to happen and how to come through those periods.

« Also, I think if we were coming out of those matches wondering why things hadn’t gone quite so well, then that would be more of a concern but we knew exactly the reasons and it’s a challenge for us as a group of staff and then ultimately for us to put that challenge to the players to respond.

« We know the level of performance needs to be incredibly high to achieve what we want to achieve in in the World Cup. »

While the pressure is on for England to pick up positive results away to Italy on Friday – they will be relegated if the are beaten in the San Siro – and at Wembley against Germany on Monday, Southgate is relishing the opportunity for his side to go up against two European heavyweights.

« We’re wanting to of course improve our performances from the summer and to leave the camp feeling good about ourselves going into the World Cup. To come here and play Italy in Milan is a great opportunity to do that. »

John Stones is suspended for the Nations League game with Italy, following his red card against Hungary last time out. Jordan Henderson is unlikely be involved in Milan, with the Liverpool skipper returning to fitness, but could feature against Germany on Monday. The rest of the squad trained as normal on Thursday. 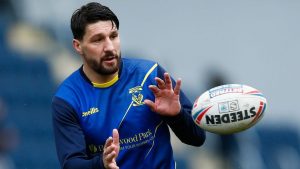